Home » Cooking for Your Gluten-Free Teen Review plus waffle recipe!

Cooking for Your Gluten-Free Teen Review plus waffle recipe! 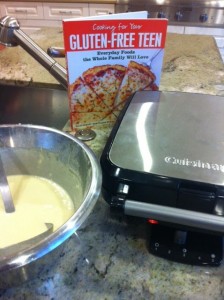 Review of Cooking for Your Gluten-Free Teen

Cooking for Your Gluten-Free Teen: Everyday Foods the Whole Family Will Love

Thank you to Carlyn Berghoff for providing a complimentary copy of her cookbook for my review.

Take a hearty cookbook filled with some fun, family-friendly, mealtime staples (minus the gluten, of course!), mix in a good selection of tips and resources for living with gluten sensitivities, and a healthy dash of some personal storytelling and you’ve got Cooking For Your Gluten-Free Teen.

Chef Carlyn Berghoff, CEO of Berghoff Catering and Restaurant Group in Chicago, didn’t set out to become a figure in the gluten-free community. Yet when her daughter Sarah became sick and was later diagnosed with Celiac disease, Berghoff knew she had to change up her cooking style at home. After hours of experimentation in the kitchen, she ended with some success stories and, consequently, material for a new book.

Divided in two sections—one devoted to the gluten-free lifestyle, the other carved out for Berghoff’s recipes—this colorful resource offers a wealth of support to those new to the gluten-free world and showcases perspective from Berghoff herself, Sarah, and that of Dr. Suzanne P. Nelson who specializes in pediatric gastroenterology and is accustomed to delivering the Celiac diagnosis (and coping recommendations) to teenagers and their families.

Berghoff’s recipes are laid out in a clear, easy-to-follow manner and are sprinkled with some enticing photography throughout. She made a list of the top 30 foods children miss being on a gluten-free diet and has included these in the book. Look for favorites like crispy chicken, macaroni and cheese, pancakes, cupcakes, and more.

I tested a number of recipes in the book and would say my favorite was the hamburger buns; I had never thought to make my own. I fought my desire to use my own recipe and ingredients but decided to use Carlyn’s instead (except I used my gluten-free flour blend). My family was ecstatic. I even went so far as to buy a muffin top pan. The only problem is that the pan holds only 6 buns and there was not instructions on what to do with the rest of the dough. The yield on the recipe says 8 buns but I think you could make about 12. I ended up making rolls in a silicon muffin pan with the extra dough (yum). 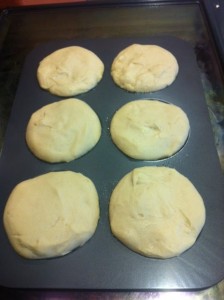 In the recipe, it was not clear when the dough was supposed to rise. I proofed the dough, punched it down, portioned it and then let it rise again. I’m not sure if that was the right technique but it worked. Having experience with making bread certainly helps. I just bought a second muffin top pan so I can make 12 at a time. I plan to put the extras in the freezer.

The outside was crisp and the inside very soft and moist; it was not crumbly or dry at all. After cutting them in half, I found it helpful to toast the bun slightly. I would say the only problem is that if I make a lot of these, I might end up getting used to having a bun again!
If you are looking for options for other allergens like dairy or egg-free variations, which can sometimes go hand-in-hand with gluten sensitivities, the substitutions are generic and it doesn’t look like it’s been tested. Also, many of the recipes include dried egg whites which may or may not be available in your supermarket. I didn’t see a substitute for the dried egg whites so I used 1 egg white. I have since bought the ingredient and will be trying some more recipes. I’m curious as to how it will be different. 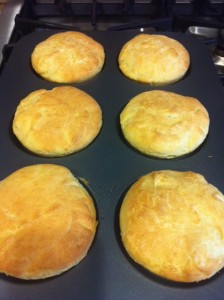 Buns out of the oven

All in all, I think it’s a great book for those who are cooking for children and teens. Make sure you have the ingredients on hand as well as the equipment. Berghoff also offers lots of tips for substitutions and general cooking.

Check below for Berghoff’s recipe for waffles. For me they came out a little on the moist side because I used egg whites instead of the dried powder but they were consumed quickly. That is how I judge the success of a recipe! 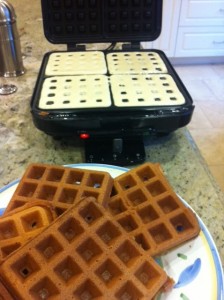 Waffles from Cooking for Your Gluten-Free Teen

Add the 1¼ cups milk, the egg, and the oil. Using a hand-held mixer, beat on medium speed just until the batter is smooth and no lumps remain. Do not overbeat. Important: Let the batter stand for 5 minutes. Stir in the 2 tablespoons milk and mix until smooth.

Cook on a non-stick waffle iron according to the manufacturer’s instructions. The recipe makes 4 waffles in an 8-inch diameter pan that makes 7-inch waffles, and the recipe can be doubled.

One Response to Cooking for Your Gluten-Free Teen Review plus waffle recipe!