Home » What I learned about food and eating on my cleanse

What I learned about food and eating on my cleanse 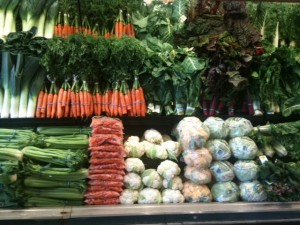 Start in the produce section

I had an amazing experience this summer when I “cleansed” for 10 days. The reactions I received were interesting; some people thought I was going hard core, you know, like water with lemon and cayenne pepper with maybe some celery sticks for dinner. Many people were supportive. All I know is that I certainly felt I have gained some clarity (and lost some weight).

The Clean Program
Before I started, I read the book “Clean” by Dr. Alejandro Junger. A few friends I know had done it with great success. The cleanse itself is called “The Clean Program” in which you follow instructions given in the book. It’s important to read it first as it helps to understand why you aren’t eating certain food or what is happening to your body on a daily basis. Yes, I tried to fast forward to the end but that didn’t work! I think it’s great to do a cleanse if you are a good candidate (always check with your doctor) but I think what is most important, is what you get out of it afterward. Since I wasn’t cooking all of the time, I had more time to think. I learned that:

Healthy Eating
If you are reading this blog post and drinking a diet soda or eating something from a bag, stop and think about what you are really putting into your body. If you don’t think there is a connection between our health and what we eat, take a second, step back and really think about it. This cleanse made me do that. I’m not insisting you try this cleanse but I do think we all need to think about what and how much we eat, especially if you are trying to lose weight. So many people think they can’t do it (I’m too busy, I don’t like to cook, it’s too hard…) but most of it is within reach; in the produce section. Eating raw fruits, veggies, nuts and seeds has a huge impact for me. I used to think I had to eat a certain amount of food but was amazed at how I could function on so little.

Managing Hunger
Yes, I was hungry during the cleanse but I could still work, work-out, be a mom, friend and wife. I had energy and felt good. When I went back to eating regular food, I noticed how much I burped! Guess what I didn’t do on the cleanse? I found I was less hungry and more thirsty. When I was hungry, and it was in between meals, I had some carrots, cukes or a handful of berries or nuts. That really helped. Once I made it to about 5pm, I was fine. Well, except the night when I was at a client’s house and they were cooking steak. I truly felt like the shark in Finding Nemo who tasted the blood! But I made it through. The first week was easier than the second and in my work, by the second week, I had less discipline. All in all though, I felt I did okay.

Caffeine
Earlier in the summer, I had the unfortunate experience of coming down with strep throat. I was basically on a liquid diet for 5 days and did not want to drink coffee; I had tea instead. I found that this was a good test, not that it was intentional, that proved to me I didn’t need coffee. I just drank herbal teas. I would have a decaf chai which I flavored with almond milk and agave nectar or ginger lemon tea. I miss that now!

Juicing and Shakes
In order to aid digestion, two of your three meals are liquid. I usually had one shake and one juice. With my juice, I added some hemp powder. Hemp protein powder is its own whole food source. It has the optimal balance of the Omega 3 and Omega 6 Essential Fatty Acids and is also very rich in fiber, complete protein and branch chain amino acids. It’s green which may not look appetizing but can hardly be tasted. I’m still using it today. I loved shakes with berries for the antioxidant benefits and was able to switch to unsweetened almond and coconut milk pretty easily. Even now, I can have a shake at breakfast and feel full until lunch (as long as I have some water). If I am hungry, my snack might be some nuts and seeds.

One of the suggestions is to drink a vegetable and/or vegetable and fruit juice each day. I’m not talking about orange or something from Jamba Juice. This is the type where you have the special juicer (got my Jack LaLanne at Costco) and you push the veggies or fruit through a shredder to take out the juice. It leaves the pulp behind. After the cleanse, I watched a fascinating documentary called “Fat, Sick and Nearly Dead” where a man from Australia cures himself by drinking juices for 60 days. From the website, he is described as “100 pounds overweight, loaded up on steroids and suffering from a debilitating autoimmune disease, Joe Cross is at the end of his rope and the end of his hope.” He also helps an American truck driver, Phil Staples, to turn his life around. Phil loses over 200 pounds on the “reboot diet”; completely amazing. He is now an inspirational speaker. Maybe we just need fewer drugs and more juice?

Other Meals
Sometimes my meals were made up of a big salad or quinoa and beans but on other days, I got quite creative. I adapted one of the recipes in the book and made a roasted (i.e. baked) salmon which I served on wilted arugula and spinach with a cilantro pesto. Check this blog entry for the details. Because I was not eating as much, I noticed I didn’t spend as much time prepping. Since I was not able to eat “whatever I wanted”, even when I was home, I had more time. It was really quite fascinating.

I would say the bottom line is if you want to do a cleanse, always talk to a doctor first and make sure you are a good candidate. I called this cleanse “civilized” because I was able to eat some real food. Make sure to read the book first and don’t try to go to the end right away looking for the answers to the test. The stories and information are very interesting. When you step back and think about it, it all makes sense. Plan it in your calendar to make sure you have the time and that there aren’t too many social commitments which would make it difficult. I did mine right before a vacation and eased back into eating 2 days before. If you go off of program for a meal, just start back up the next day. I had to taste some food while cooking and couldn’t seem to resist movie popcorn I had gotten for my kids (but I still ate so much less than normal).

I talked to my brother about it and suggested he just read the book. He asked me “What are the big takeaways” to which I replied:

It’s not rocket science but it is a change of lifestyle. When I speak to clients, I explain to them that my healthy eating is not 100% perfect and it has taken me 8 years to eat better. I had some mojitos last night and I’m making carrot cake tonight. But, relative to who I was and how I ate in 2003, I feel like I’m on a good path that is working for me and my family. My husband even commented “I am ready to go back to gluten-free”. Yippee!