Home » Interview with The Gluten-Free RN: Why you might have celiac disease but don’t know it

Interview with The Gluten-Free RN: Why you might have celiac disease but don’t know it 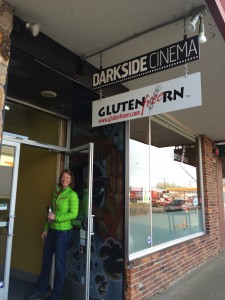 Nadine Grzeskowiak, The Gluten-Free RN in front of her office

Here’s a quiz for you:

If you answered “true” to any of these questions, you might be in for a surprise. Read on to find out why you might have celiac disease but don’t know it. If you are sick of being sick, this might be the answer. 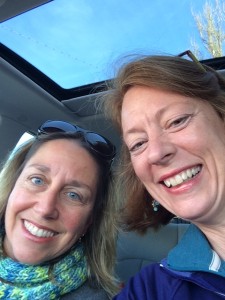 Nadine and I during my visit to Oregon

The following is an interview with Nadine Grzeskowiak, RN, BSN, CEN, The Gluten-Free RN. She was an emergency room nurse for 13 years and spent her days seeing many sick people. In 2003, after contracting pneumonia, her health went into a downward spiral. She saw multiple doctors, was prescribed multiple medications but nothing seemed to work. If anything, she was getting worse and her body was beginning to shut down. This continued for four years.

In 2006, much to her surprise, she discovered the source. A savvy dermatologist suspected she had celiac disease linking it to Nadine’s persistent eczema. When the doctor said, “I know what you have and it’s really rare; you have dermatitis herpetiformis and celiac disease”, Nadine said “I have been a nurse for 16 years and I have no idea what that is.” So if you wonder why your doctor does not think to test you for this, here’s the perfect example.

Currently, she is an expert in celiac disease and related autoimmune disorders. She is an educator, advocate, and international speaker. She is also the author of Dough Nation which will be published in 2015. 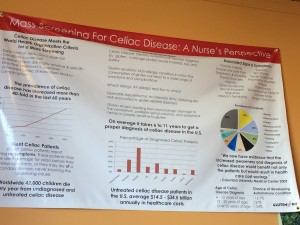 I asked Nadine to do this interview with me as a way of providing more information to people who have questions about celiac disease and the perils of gluten.

Let’s do a quick review. What is celiac disease (CD)?

CD is an autoimmune disorder triggered by the protein in wheat, barley, rye, and oats (if not certified gluten-free; also some people still react to it) that causes villous atrophy or the shortening of the villi in the small intestine. That damage leads to malabsorption of nutrients and a damaged immune system which impacts the entire body. Even though the damage is in your gut, you may have no gastrointestinal symptoms.

Eating gluten-free (GF) has become very popular over the past 5 years. Celiac disease used to be so uncommon. What do you think is happening?

Let’s start with some history first. Interestingly enough we knew about CD between 1880-1950 back when the doctors thought it was a childhood disease kids grew out of but they didn’t know what caused it. Around 1952, all research money was taken away from the doctors who were studying CD. World War Two ended, the government was worried about starvation, so they got together with the farmers to decide what to grow: wheat, corn, soy, and peanuts.

In 1996, when Dr. Allesio Fasano from Italy wrote a paper asking where are all of the celiacs, people started to listen. According to him, celiac disease was prevalent (relatively speaking) in the world so his question was why did we, in the U.S., not have that many reported cases. Soon after, Dr. Fasano and Dr. Peter Green from Australia created research centers.

The National Institute of Health went so far as to attempt to do a mass screening to see how many people in the U.S. truly had CD but that never happened. Instead, through the doctors’ centers and media attention from people like Alice Bast from the National Foundation for Celiac Awareness (NFCA), celiac disease was put on the map. Even though CD affects a certain percentage, currently estimated to be 1% of the population, this percentage has been undiagnosed for years. This could be one reason why CD and gluten intolerance has seemed to increase.

The school of thought now is that someone must have three things in order to have celiac disease:

1. The celiac gene (which may be other genes than the two we currently know about)

3. Some type of trigger, either emotional or physical (e.g. divorce, death of a loved one, serious illness, surgery or an accident)

Currently, if you carry the HLA-DQ2 and/or the HLA-DQ8 gene and you eat gluten, you are susceptible to the disease. It is estimated that 40-50% of anyone with European descent has the gene. As for other parts of the world, there is not yet enough data. We do know that people of other ethnicities can have celiac disease; there’s just not as much information.

Another reason why the disease and gluten intolerance might be more prevalent could be that our immune systems are compromised. In the last three decades, there has been an overuse of antibiotics. All of this takes a toll on our immune system. Throw in inflammation from all grains (not just the gluten containing ones) as well as a genetic predisposition and it might seem to be clear why it’s so common.

Lastly, the quality of the grains has changed. Farmers are paid more to grow hybridized wheat with 50-400% more gluten. It is the quality and the quantity of the wheat we are exposed to everyday.

It seems to me that many people and their children have symptoms the doctors don’t know how to treat properly. Can this be linked to their diet?

If doctors were taught about CD in medical school, they were told to look for two things: chronic diarrhea and weight loss. But what we know now is that there are over 300 signs, symptoms and misdiagnoses associated with CD and gluten intolerance. Most primary care practitioners and specialists are not aware of the myriad of ways both CD and gluten intolerance can present. So the answer is yes, what we eat can directly impact our health and the expression of the disease.

Many people will test negative for celiac disease (and test negative multiple times as well) so their doctor then rules it out. Quite often, the genetic test is not run. If the doctor thinks the patient does not have CD, the doctor will focus on treating the symptom and might not get to the root cause. The celiac antibody blood test is notoriously false negative.

What are other symptoms besides the obvious gastrointestinal ones that kids might have that aren’t related to the above?

I frequently see kids that have headaches, fatigue, short-stature or that are falling off the growth chart, constipation, dental problems (like dental enamel defects), acne or rashes, learning disabilities, anger issues, diabetes, Downs, Turners or Williams syndromes, osteopenia (brittle bones), anemia, allergies, and cancers. Often parents are told that their children are growing normally on the growth chart but are below average (40% or less). So they grow slowly but stay at 5%. This isn’t normal and can be caused by malabsorption. If you catch kids soon enough, they can grow to their predetermined height.

Another common indicator is a child that is often sick. What is happening is that the immune system is damaged and cannot fight off infection; even something as simple as warts. Your body should be able to fight that virus but doesn’t have the capability because it’s damaged.

I hear people say “I have no problem with gluten.” What do you think?

Another aspect is that gluten is addictive so no one wants to give it up. It has a morphine-like affect on the brain like a narcotic. People get addicted to it. Do you ever think about why we call it comfort food? So telling someone they shouldn’t eat gluten can be similar to telling an addict they probably should stop using drugs. People don’t want to hear it or consider the option of not having gluten in their diet. The people that are the most protective of wheat and grains are the most addicted; this can be an indicator of CD.

What happens if someone suspects they have celiac disease or a gluten intolerance? What tests should they get?

Let’s assume you read this article and you are concerned about yourself or a family member. Schedule an appointment with your primary care provider before you change your diet. If they offer Cyrex Lab testing, ask for the Array3 blood test. Otherwise request the standard celiac antibody panel blood test.

Once you go on a GF diet, your antibodies should go back to normal so the blood tests will look normal. If the blood tests comes back positive, typically you will have the option to get an endoscopy and a biopsy to confirm celiac disease. If the blood test is positive, you have gut damage whether they’d find it on the biopsy or not because the damage is frequently patchy.

One thing to note, antibody tests are notoriously false negative; your results may be negative but that does not mean you do not have CD. Testing can be tricky as well as interpreting the results. However, you can always get the gene test.

What if the blood test comes back negative? Can someone get the genetic test and if so, what should they ask for?

If your blood tests comes back negative and you have symptoms, get a genetic test. You can ask your primary provider to test you for the HLA-DQ2 and HLA-DQ8 genes. You can also do it yourself by purchasing a cheek swab kit from GlutenPro.com or EnteroLab.com.

My opinion is that if you have symptoms, especially severe ones and you test positive for any of the celiac genes (even the “low risk” ones) go on a strict gluten free diet and treat yourself like you have CD. Keep in mind 39 other genes have just been found to be associated with celiac disease.

Do you see people who don’t have cd but still have symptoms? What should they do?

I suggest trying a 100% gluten free diet for at least 2 months and see how you feel. It’s possible you might need more time to detox and/or it might be other foods such as dairy, soy or any grain. If you still have symptoms after 2 months, I would try a high quality, high fat Paleo diet for at least a month or more, especially if you have neurological issues.

It might not be clear what the source is of your symptoms but it’s clear we need to change the way we look at food and what we eat as a society.

3 Responses to Interview with The Gluten-Free RN: Why you might have celiac disease but don’t know it